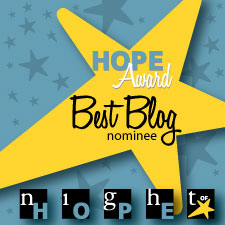 Almost A Father has been nominated for the Hope Award for Best Blog!

Check out the great nominees here http://www.resolve.org/vote and vote for your favorite!

Elliana has been hitting me with some tough questions lately.

She recently learned from a friend who was on the verge of moving to a middle eastern country that women are not treated with respect in some places.

In fact, she learned in many ways, they are treated with less regard than a stray animal.

As she dug even more, she was infuriated to learn that only recently have women in this country been able to vote.

I do my best to assure her that she has more opportunities now and in this country than at any time before, but it doesn’t do much to calm her mind when it travels to other countries where women are treated so poorly to this day.

It did get me thinking about the whole issue of infertility.

I can’t seem to get it out of my head that the Family Act of 2011 STILL hasn’t been passed.

I know a lot of passionate effort is going into it, but the issue of family building doesn’t seem to have the momentum that other social issues are capable of generating.

I hear so many talk show hosts and politicians talk about what’s good for American families, yet very little is mentioned about the fact that about 1 in 4 couples of child bearing age are struggling to even get that family going.

A simple tax credit that would amount to the costs of one IVF cycle at a high success rate clinic has remained elusive.

I can’t help thinking this is another example of respect still hasn’t evolved for the capacity women have to create and nurture life.

So much effort has gone into “choice”, but the choice of pursuing family with the help of infertility doctors does not have the thunderous booming voice that other forms of choice have echoing through the halls of Congress and through the airwaves.

Maybe I’ll find my James Earl Jones voice and add some thunder to get the momentum going.