My baby is 15 years old today.

It doesn’t seem possible that so much time could go by so fast—the standard cliché that you hear from every parent that watches their beloved child grow up.

As much as we wanted Elliana to come into our world, it hasn’t been easy.  I used to get furious when I heard people say that who had finally resolved their infertility journey, but now I get it.  You think that just because you suddenly have this miracle, everything in your life will be fine—or at least I did.

We had our struggle—we’d fully invested all the emotional, physical, spiritual and financial capital we had, and the universe had answered our prayers against all odds in the end with this amazing being that has been the center of our universe.

It should be clear sailing from here, right?

You’re still a parent, and a human being, and the human experience doesn’t change just because you have a child after infertility.  Shit still happens.

But when shit does happen, Elliana’s smile—hell, even her eye rolling ‘dad you’re an idiot and don’t know what you’re talking about’ moments—remind me that it may not be easy, but it will be worth it.

To add to the angst of knowing my baby is growing up, we have moved to New York City.

Again, against all odds, our bundle of joy searched through over 600 schools and chose a high school in New York City that she wanted to go to.   After winning a citywide songwriting contest in January of this year, one of the judges asked her where she was going to school.

She said the name of the high school—which she is now going to in the middle of Hell’s Kitchen, after being one of 400 kids to be accepted out of over 8000 applicants.

At that point, she wasn’t accepted yet, we were still living in Tucson and nowhere close to being ready to move the life we’d built for 14 years, and honestly the odds of her getting in were very low.

Yet Elliana had already spoken it into existence.

There’s only one other time I saw someone do that.

It was when Lisa wrote in my day timer in January of 2002, saying she predicted we would have a baby girl by October of that year.

By October 1st, 2002,those words because prophetic with the birth of our formerly frozen New Jersey embryo, Elliana Faith Ceizyk.

Words of faith have power.  I’ve found the times when all of my own resources and ideas have been exhausted, a higher power, a more intelligent and wise source of strength and wisdom often seems to tie up the loose ends.

I put this quote on Elliana’s birthday today, and I offer to all of you still trying to realize your dream of parenthood, or trying to take some major leap of faith in your life: 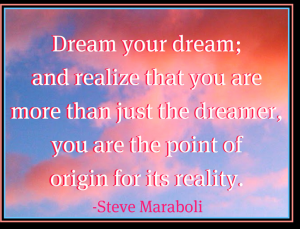