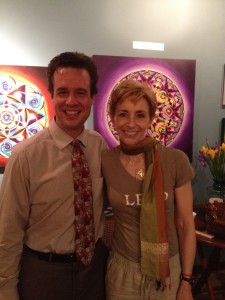 This past July I had an aha moment.

I just didn’t know it until today.

I blame it all on Martha Beck.

Lisa got me a ticket to see her at a very intimate and informal gathering.  Although the event description said Martha would speak about how to find my way in the ‘ever changing tides of your life”, I knew it would likely be about whatever spirit moves Martha.

I always liked Martha Beck’s quirky but amazingly insightful suggestions for being true to your North Star when she appeared on the Oprah show. Her Finding Your Own North Star musings saved me from the depths of an out of control emotional pity party (compliments of a sudden dip in testosterone), and exacerbated by an initial trip down the pharmaceutical path to recovery, which only made my insomnia and crying fits worse.

To change the course of my negative thoughts, I followed her suggestions and made a vision board, complete with a finished version of Almost A Father on the best selling list, and Martha’s picture in the corner. It was still missing something.

I believe in angels and God and Jesus, but channeling something visually into my life has always pushed the limits of my faith into reality thinking process. Though I doubted anything would come of it, I decided to try a little meditative visualization exercise and see what I connected with.  I figured I had nothing to lose, so I closed my eyes and opened my mind.

A firefly entered my mind, and I began to smile.  I love fireflies.  As a kid I remember how amazed I was the first time I saw them light up the sky on a family bicentennial trip in the summer of 1976 when I was just ten years old.

During our infertility journey, fireflies symbolized the flicker of life that we experienced with our first positive pregnancy.  For eight glorious days, our little “Dublin” (because his very low HCG levels kept doubling against all odds) brought us out of the world of never having seen a remotely positive pregnancy result to almost being parents.  He came the closest to ridding me of the almost a father title.

In the end, his beautiful brief light faded out.

But the hope he brought from those eight days shined on in new ways.

All those firefly thoughts filled my head during that brief meditation, and when I opened my eyes, I noticed something that looked like a glow stick shining on the living room floor.  It was so small I figured I must be seeing things.  It pulsed, bright and then soft. Bright and then soft.

The hair stood up on my neck.

I racked my brain for a rational explanation.  Maybe Elliana has broken a glowstick and the  fluid was the evidence that her then five year old cover up skills had missed.

Only problem was on closer inspection, the glowy fluid had wings.

IT WAS A FIREFLY.

I packed it into a sealable lunch bag. Internet research confirmed that in the dry Tucson desert in August, a firefly had somehow founds its way into my living room.

I still have the plastic sandwich bag with the fragmented remains of that formerly bright lightning bug. I was certain some day I would tell Martha Beck the story.

That was in the back of my mind as I sat in a room filled with about fifty women and maybe two other guys while Martha Beck asked people to share their own experiences.

Many of the women were very in touch with their inner spirit guides, and I felt stupid even considering saying anything to Martha.

I’m a guy.  This is a woman’s thing.    I kept thinking I’d heard those words before, but in a different setting.

The meeting wrapped up, but I was compelled to stay.  I wanted to talk to Martha.  Wanted to tell my goofy firefly story.  But why?

I lingered in the bookstore, hoping I would find a book of hers to buy so I would at least have a logical reason to approach her that did not make me look like a stalker.

But Martha wasn’t selling her books. The entire event was just for her to share her experiences, and get people in touch with their creative, real self.

She was about to leave when a voice in my head screamed TELL HER!

So I mumbled something about how she helped me and then launched into the whole firefly vision board thing in an awkward approach I was sure would result in a nod towards some security person.

I managed a relatively coherent explanation of how that firefly moment had set me back on a track to finish Almost A Father.  That firefly reminded me of Dublin who had inspired me to connect to my creative soul. That creative soul drafted an email to a CBS News Producer after I got a heads up from Resolve that they needed stories for an upcoming segment. That email resulted in a flight to appear with Lisa and our five month in utero Elliana on the CBS Early Show to tell millions of people our sobs to success story.

When I finished Martha smiled and gave me a big hug.

“It’s great to have some guy power here!”

Then I get an email today, months later with words from Barbara Collura from Resolve:

It takes courage to face the agonizing realization that you might not build your family in the way you had planned. It takes courage to fight the feelings of isolation and shame that often accompany this misunderstood disease. Most of all, it takes astounding courage to move past recurrent disappointments and grief to continue your family-building journey with hope.

I remembered where I’d heard that voice at the Martha Beck event that whispered the words and almost kept me from my “aha” moment.

Now I hear that voice again.  Only it’s not whispering any more, and the words have changed.

I’m a guy.  Infertility is a couple’s thing. I have a loud voice, and I’m going to make sure it gets heard this year.

It takes courage to help your wife through the darkest ours, and advocate for something that is often characterized as a woman’s issue, but is most definitely a couple’s issue.

In the spirit of Martha’s pride in my guy power, I’m going to dedicate one article every month to speak to all the almost a father’s out there who are struggling and try to provide them with a North Star to follow through those dark lonely nights when the waves are crashing all around.

Guy power will give me the courage to take the trip to Advocacy Day in Washington DC in 2013 to raise more infertility awareness and get the Family Act of 2011 passed once and for all.

For some reason this past October brought back a lot memories from a very different Halloween 11 years ago. My sister Debbie had just had her 2nd little boy, Jake, and Lisa and I were spending our 3rd week in New Jersey hoping at least one of the embryos St Barnabas’ medical staff had transferred… END_OF_DOCUMENT_TOKEN_TO_BE_REPLACED

Little Grandma Lyons went to be with the Lord today. She leaves behind 104 years of faith and fearless pride in her family, and stories of her life that will be carried on by all those who had a few minutes to spend talking with her. I still remember late nights staying up listening to… END_OF_DOCUMENT_TOKEN_TO_BE_REPLACED