They say a picture is worth a thousand words.

The same is true of video-although it only took about eight words for me to get a pretty clear picture into the motivations behind the supporters of SB 1376.

I have never watched a Senate hearing video in my life.  However, the fast track SB 1376 seems to be on has an urgency that seems rather unusual for something that is characterized as a “reporting and data bill”.

Senator Melvin’s office said I should reserve any opposition to the bill until I watched the video myself.  So I watched it here: SB1376 – reproductive technology

Despite a well spoken opposition speech by Kristen Bollini on behalf of the infertility community, Senator Barto offered no clarification for why the Arizona legislature needs to have a reporting and data report containing information that is already provided at the national level by the Center for Disease Control.

Senator Barto sounded almost indignant when infertility testimony provided by a reproductive endocrinologist, Dr. Larson, suggested that the motives behind the bill had little to do with reporting and data, and more to do with a hidden agenda to outlaw IVF.

In fact, Barto cut him off with a reprimand:

“I would refrain from imposing motives on other people.”

Then she rattled on about this being a “consensus movement” and expressed serious concerns about “peripheral issues.”

Although thes concerns are not expressed anywhere in the language of the bill, Senator Barto did manage to voice speaking points from the Center for Arizona Policy’s executive summary regarding the destruction of embryos, and the sale of women’s eggs in egg donation.

But then Senator Barto exceeded even the CAP’s focus on the unborn, expanding the range of concerns to the born and living when she said they need to look at “the psychological impact of being a genetically engineered child.”

Being incredibly protective of my daughter, my first instinct was to take a drive up to Phoenix to have a chat face to face with Senator Barto to ask exactly how she intended to assess the ‘psychological impact’ of my daughter being an IVF baby.

But then again, Barto used the term “genetically engineered child.”

I can only assume this was another infertility language faux pas, kind of like the incorrect use of the word “embryo” and “implant” in the language of the bill that I addressed in yesterday’s post.

Or was it a mistake?

Is Senator Barto preparing us for a day when the Arizona Legislature and the CAP will want to interview children born from IVF to determine the psychological impact of how they were conceived?

I’ll save them the trouble.

My daughter knows exactly how she was conceived.

She knows I wrote a book about the lengths that Lisa and I went through for six years to bring her into the world and published it this past summer.  She knows I wrote it to give hope to other aspiring fertility challenged couples so they know they aren’t alone, know what might be coming, know it will all be worth it, and know that this issue transcends gender, and is truly a couple’s issue. 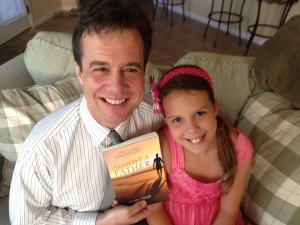 Our IVF baby with Daddy’s book about how she got here…see the psychological impact on her face?

Elliana attended the Night of Hope Resolve infertility charity event in New York City, and blogged about it this past January. in Elliana’s Corner: Words From Our Formerly Frozen Embryo

She tells us how loved she feels all the time.

She is secure and an honors student at school, dances at the competition level, and told me last week as we were driving home from another late night dance practice “that before she leaves the world she wants to teach other kids to eat better and be more healthy.”

There was no genetic engineering that produced that.

She wants to make the world a better place.

We know she already has made our world a better place.

God gifted our child, made from our biology, in a petri dish with the assistance of a team of reproductive specialists, frozen for a few months, and then thawed out, with all of these remarkable traits.

Why the architects of SB 1376  think they have any right to examine anything related to how my wife and I use our biology to CREATE LIFE, is beyond me.

But I sure as hell have the right to understand the motives of this bill, especially if they are now suggesting an intent to expand the reach of “concerns” to children already born from IVF.