The snow angel photo was taken today, and is the result of our formerly frozen embryo’s snow angel making efforts.

Twelve years ago the idea that I would get this text from Lisa while they were out playing on the golf course after an early day out was called on account of snow in the desert was beyond the realm of rational reasoning.

Twelve years ago, Lisa was facing endometriosis surgery #2 after two failed IVFs in a row.  Months later we would get surprise birth announcements from her brother, my cousin and several co-workers and friends of the family.

It seemed as if there was a snowball’s chance in hell that we would ever have a child at that time.

Any time there is mention of snow I flash back to the frozen embryo transfer in January of 2002.

After failing our fresh IVF just a few months before, Lisa was adamant about going back to get our New Jersey embryos into her body.

It was agonizing for her to take December off to ‘rest’ in between cycles, as our RE Dr. Sable, head of the St. Barnabas IVF crew at that time wanted us to do.

There was a lot of Crown Royal drinking during that time to get through another pregnantless holiday, but once the new year hit, and the prescribed resting period was up, we were up and running…or flying…to New Jersey.

While we were there, a snow storm hit, and against better judgment, Lisa couldn’t wait to get out and trudge through the foot of snow.  The roads were plowed enough for me to avoid sliding or spinning as I turned, and thankfully the few times I did skid a little longer on a stop there was no traffic for me to strike.

We stayed out in the snow until late in the evening, using up all the nervous energy we had about the pending transfer of our last two “poor quality” embryos on snowball fights, and snow angels. 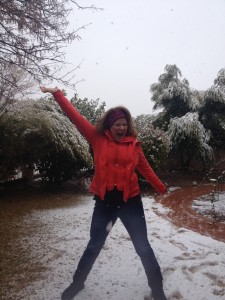 Lisa reliving her Buffalo childhood in our Tucson desert backyard!

St. Barnabas wouldn’t even give us odds of success after the transfer.

After having to sign an acknowledgement that transferring our alleged “Cover of Embryo Magazine” worth fresh embryos because Dr. Sable was so convinced we’d have multiples, we weren’t exactly encouraged about whether the cycle would work.

In fact, it seemed like there was a snowball’s chance in hell that we could expect a positive test after getting a BFN on the fresh IVF.

Yet there must be some remnants of heat resistant Frosty somewhere down there, because on February 1st, 2002, we got a BIG FAT POSITIVE.

The snow that fell today reminded me that sometimes it DOES work out.

Sometimes against all reasoning and logic, the snow does fall in the desert.

And sometimes, that snowball shows up even when you think you’ve entered the 7th circle of infertility hell.