Do not go where the path may lead; go instead where there is no path and leave a trail.

I’ve been ruminating on this Emerson quote since I returned from the inspiring company of so many warriors fighting for a better present and future for aspiring parents afflicted by infertility.

There were at least a dozen times I was on the verge of canceling my journey out there. The amount of sacrifice and commitment it takes to leave your regular life for a few days to fly across country and advocate makes me appreciate what RESOLVE: The National Infertility Association, does for us 365 days a year.

I had the opportunity thanks to RESOLVE to meet several government affairs representatives who contribute to the infertility cause. I wanted to learn what it takes to advocate day in and day out to make a change.

I heard amazing stories of persistence and dedication and courage that culminated in the amazing array of causes were advocating for in the Senate and House offices just a week ago.

One thread that was consistent in my conversations: it is truly remarkable how much impact RESOLVE: The National Infertility Association has on bringing infertility to the forefront of public discourse. I never realized it until I was walking from office to office, eavesdropping on the fast moving staffers, asking questions about the economic impact of a bill, requesting more information to be faxed, and giving whomever was on the other end of the phone advice about how they wanted to present it to their representatives: it takes an enormous amount of coordinated, organized effort to bring attention to anything in Washington DC.

Yet that is exactly what RESOLVE does, and they managed an army of 170 people this year in DC, amid a flurry of letter organization, meeting scheduling and inspiring speeches to rally the troops to promote not one but 4 amazing breakthroughs that could provide massive benefits to thousands, if not ultimately millions of infertile Americans.

When I looked at the statistics and heartbreak of the injuries sustained by soldiers from the proliferation of IEDs in modern warfare, I was stunned that the Veterans Affairs wasn’t covering any IVF for veterans and their spouses. That’s why S 469, The Women Veterans and Other Health Services Act of 2015, should be such an easy bill to get bipartisan support for.   With the help of other advocates from Arizona, I had the opportunity to meet with Senator McCain’s office and Senator Flake’s office, and the staffers seemed surprised that IVF wasn’t being offered to disabled veterans.

I look forward to following up with the staffers we met, and meeting the local offices to further the discussion, and educate them about any concerns they have about fertility preservation, which I recently learned is a hot button opposition issue for many Republicans . Being a right leaning, Catholic raised constituent, I hope to shed some light on the dark shadows some local policy groups have unfairly cast on the motives of the fertility medical profession.

The Adoption Tax Credit Refundability Act of 2015, S950, also resonated in our meetings. It has  enormous potential to  take some of the burden of foster care off of the state, and provide added financial relief to the many lower to middle income couples who open their homes up to special needs children, loving them and raising them in a way that the foster care system can’t.

The Center for Disease Control National Action Plan on Infertility was the one topic that was both the most difficult to explain in meetings, but the one I believe is a game changer for us all. 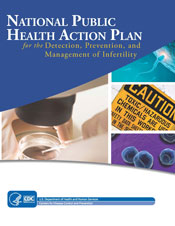 I had the opportunity to hear the back story on what was involved in getting the CDC to finally put infertility on the radar as a public health issue, and this plan has the political support of people in very high places. Without getting into details, it is the efforts of a few very inspired and relentless RESOLVE advocates that we have the CDC National Action Plan on Infertility to discuss in our meetings.

Advocacy Day restored my faith in the American system of government, and the power that we have as citizens of this country to change things.

Having been in the mortgage industry, an industry where very little advocacy happens proactively, I have become cynical that change can really happen, that grassroots efforts ever work, or that government officials actually listen.

Getting the news about HR 2257 the morning of Advocacy Day helped me see just how quickly change can happen. The years of organized blood, sweat and tears all come to fruition in moments like that—moments where the landscape changes, the framework for change is reinforced, and we get another step closer to realizing a new future.

There was something metaphoric about the Capitol building being under construction. 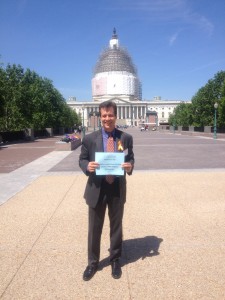 I took this picture because I believe the debate about infertility is under construction. The Center for Disease Control National Action Plan on Infertility has already shifted the rhetoric from one that characterizes infertility as a voluntary lifestyle choice to a disabling major life event. 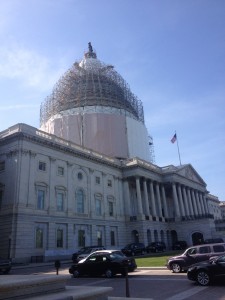 I heard the term healthcare inequality for the first time when I was talking to a couple of fellow advocates at the pre-advocacy day reception. It struck me how quick we are to approve healthcare coverage for things that will prevent a pregnancy, yet when it comes to having a disease that impairs the ability to create a pregnancy, we consider that ‘elective’.

I didn’t elect to have a low sperm count. Lisa didn’t elect to have endometriosis. We endured the confusion of trying to figure out what to do, when to do it, how much it would cost,  while the gonging of our biological clocks became deafening as precious time ticked away.

I can’t imagine how different it would have been if we’d had access to research on the causes of infertility, things we could have done to prevent it, and standardized protocols that educated us about ‘best practices’ to follow in out treatment so we didn’t waste precious time with the wrong doctors, doing the wrong procedures at clinics that simply didn’t have the resources to help us with our combination of issues.

All the wonderful people I met during Advocacy Day had so many different stories, different nuances of their own journeys, and different solutions, many of which they simply had to muscle through on their own without the help of a National Action Plan on Infertility.

Looking around at the army of advocates the morning before our appointments, we represent millions of people. And those millions have brothers, sisters, friends, parents, grandparents, uncles, aunts, cousins—all whose lives are affected by each couple that withdraw or grieve over the loss of how they envisioned having a child.

This weekend, I have family visiting and the center of our conversations involves what Elliana, our formerly frozen embryo, who just graduated from middle school has been up to. Every smile, every accomplishment, every hug, every “I love you” that comes from Elliana reminds me of the ripple effect that having a child has on each of our universes. And the ripple effect of the hole it leaves when you’re trying.

At the end of each meeting I had, I provided a copy of a letter Elliana wrote to Lisa thanking her for never giving up. “A future constituent wants you to know just how glad she is that her mommy never gave up, and I hope you’ll support these bills and initiatives so infertile couples don’t end up giving up on getting one of these letters from their miracle child someday.” 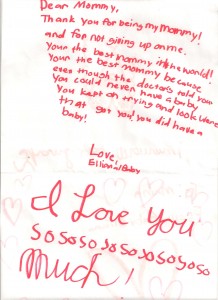 That’s why I advocate.

That’s why I came to DC.

To all the fierce women warriors: thank you for allowing a man into your tribe to join the fight the battle for healthcare equality for infertile Americans.

To the other men who were there to provide the male perspective: thank you for adding your voices to amplify the infertility awareness cause.

To RESOLVE, The National Infertility Association: You guarantee we are never alone. Thank you ad infinitum.

I am honored to be part of a cause that has taken a turn off a path that was leading to hardship for so many infertile couples, and is blazing a trail to a much better future.

2 Responses to Leave a Trail: Advocacy Day 2015 Thoughts From One of the Guys