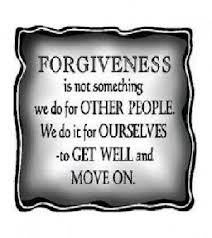 One of the things has always amazed me about Good Friday is the recounting of Jesus uttering the words “Father forgive them, they know not what they do” as he is being humiliated, tortured and ultimately executed.

I grew up being more an eye for an eye kind of guy than a forgive them because they don’t know what they do.

That was probably never more true than when we were going through infertility.

When our infertility doctor said I had lousy sperm, I wanted to knock him through the wall.  He knew exactly what he said–how could I possibly forgive that?

Then there were all the “I just look at my wife and get her pregnant” macho a-holes who couldn’t resist a little dig when they found out we still weren’t having any luck at baby making.  I often resorted to some passive aggressive comment about their receding hairline or love handles to take some of the wind out of their fertile sails.  Forgive them?  Hell no!

After we got solidly pregnant (not chemically, and with an off the charts beta from day one–you infertility veterans know what I’m talking about) people actually asked us questions like “how does this compare to how Lisa felt the last time?” (the last time being the chemical pregnancies and miscarriages).  I wanted to smack them across the mouth for uttering something that in the deepest recesses of my mind I feared would jinx us.

My ability to forgive them, and acknowledge that they really didn’t know what they were saying or doing, didn’t really kick in until after Elliana was born. I breathed a sigh of superstitious relief that their words no longer held any negative power over the outcome of the pregnancy.

It’s not like we’re “idiot comment” free.  Everyone once in awhile someone will say “so when are you gonna have a brother or sister for Elliana” or “you guys will probably just have a surprise baby now” but I have matured to the point where I can forgive them for forgetting how reproductively challenged we are.   After sixteen years of unprotected sex, it seems pretty unlikely that all of the sudden we’ll magically hit the fertility jackpot.

If there is any thing I have learned about forgiveness, it’s that it isn’t something I do for other people.

I think that is what Jesus was saying on the cross.

If He had gotten really angry and started yelling at everyone, or visualized all the things He could do to them using the wrath of God, He never would have completed His mission.

He couldn’t have moved on, to the bigger picture–His own resurrection.

If I don’t forgive, I stay lost in those awful moments, recounting the wrongs done against me and sowing seeds of revenge to make them hurt like I do.

When I forgive, I begin to feel better.  I take away the power of whatever wrong was done to me.

I feel a sense of resurrection in my own spirit.

I think that is the true power of forgiveness.

← Infertility Etiquette: Apologizing Does Not Always Mean You Are Wrong
Even The Darkest Hours Pass During Infertility →